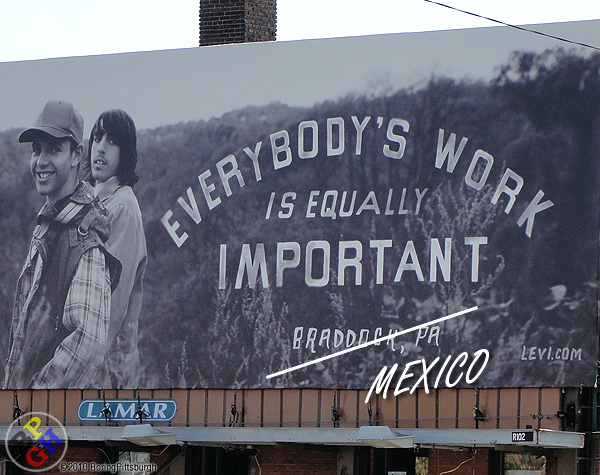 No, Levi Strauss and Co. did not actually open a blue jeans factory in Braddock, PA. We drove all over the quaint dilapidated town of good ol’ Braddock and the only factory we saw was manufacturing steel.

The company was founded in San Francisco in 1853. They started out with denim overalls and began manufacturing jeans (as we know them) in the 1920’s. Eventually they closed their U.S. factories one-by-one. By the 1990’s, 3% of the jeans sold by Levi’s were claimed to be Made in USA, but despite the tag, the Department of Labor discovered those jeans were actually put together by Chinese workers in “slavelike” conditions.

Today, the label remains an American icon, but you won’t find “Made in America” on any of the tags. Levi’s doesn’t operate any plants in USA. So why does their new marketing campaign say Braddock, PA? We can’t tell you. But it’s pretty damn boring if you ask us.

When we first saw the ad, we were excited because it looked like Levi’s had something big going on in Pittsburgh. So we set out for Braddock, PA. Other than Kennywood, most people from the city rarely go beyond Waterfront. There’s a ton of history on that side of town. We were hoping to find a Willy Wonka style jeans factory right smack dab in the middle of Braddock.

It wasn’t there. When we arrived, it felt like we were chasing a mirage. We’re used to writing about $2.50 cupcakes and bacon tasting events (coming soon). This was something else. This was a kick-in-the-ass reality check about the state of some of the surrounding neighborhoods in Pittsburgh.

Once a flourishing community of over 20,000 people, the town of 3,000 is evidently stuck in a devastating slump. It could be argued that this slump was partially caused by companies like Levi’s in the first place. Oddly, of the few businesses that are still in existence, we didn’t see any shops that might carry Levi’s jeans. We didn’t see anyone who appeared to be sporting Levi’s jeans. And most shocking was that we didn’t even see a Levi’s “Braddock, PA” billboard like the ones in Oakland.

You could say that Levi’s is using the struggling neighborhood to form their image and get extra karmic points. You could say they are exploiting the misfortunes of the area for their own advantage. The ad campaign itself makes little sense. The slogan “We Are All Workers” is a slap in the face after the controversial closure of UPMC Braddock Hospital.

Braddock doesn’t need misleading ads about them. They need jobs. If Levi’s really wanted to serve the community of Braddock, maybe they would have planted themselves there to give the locals a real chance to “go forth”. Instead, the jeans in those Braddock, PA ads are manufactured in MEXICO and other places outside of the United States.

To be fair, Levi Strauss and Co. is donating a million bucks to Braddock over a two-year period. And, the models in the ads are actual citizens of Braddock. But where will that money go? Will the people have a say? Will the abandoned and extremely dangerous buildings be removed? Will the kids get a new park?

Every penny helps, and we’re not saying this is all bad – but it’s funny to read marketing and design bloggers write about how cool the campaign is and how Levi’s is putting a place like Braddock on the map. Yeah, it’s easy to type that on your iPad from an air conditioned office in LA or NYC, but how about taking a drive down Braddock Avenue before distributing your 2 cents with the rest of the world? Or, explore the situation further like the snarky writers at Levi’s Go Forth.

When the steel industry left, we lost 250,000 jobs. We need something to bring that back. – Mayor of Braddock

An afternoon trip to Braddock, PA…

The town of Braddock, PA

Braddock News and other abandoned storefronts on Braddock Ave - "Go Forth"

One of the countless abandoned houses in Braddock, PA

One of the countless abandoned buildings in Braddock, PA

Some of the countless boarded-up buildings in Braddock 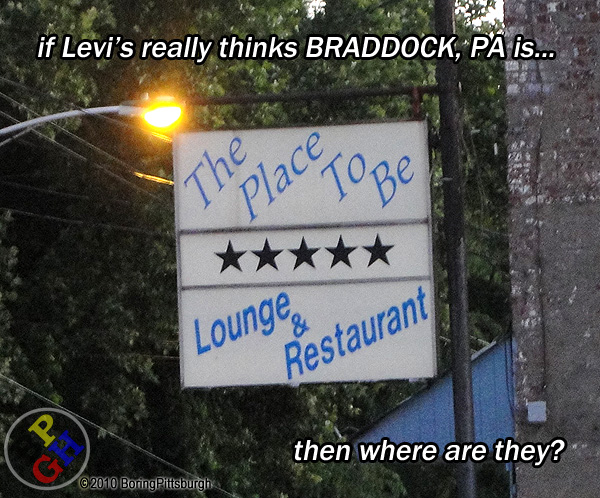 Levi's thinks Braddock, PA is the place to be

Wonder if the building owners were fined $300 for littering?

The "No Dumping" signs there were a little bit ironic...

Levi's jeans proudly made in Mexico, not Braddock, PA 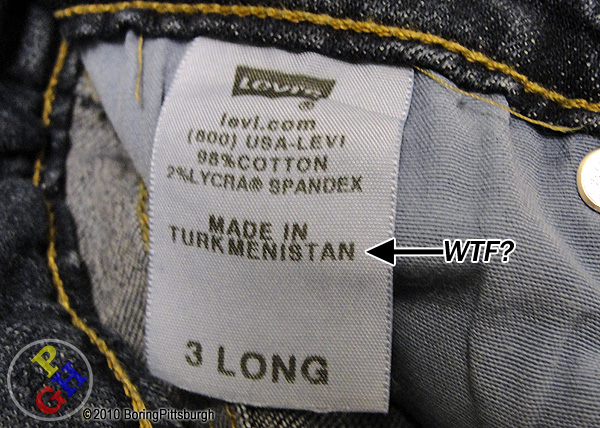 Levi's jeans proudly made in some 'Stan place, not Braddock, PA 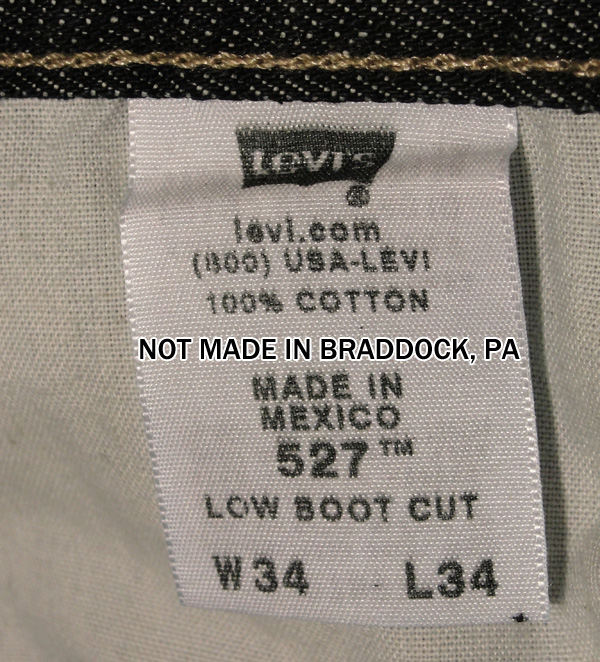 Levi's jeans proudly made in Mexico, not Braddock, PA 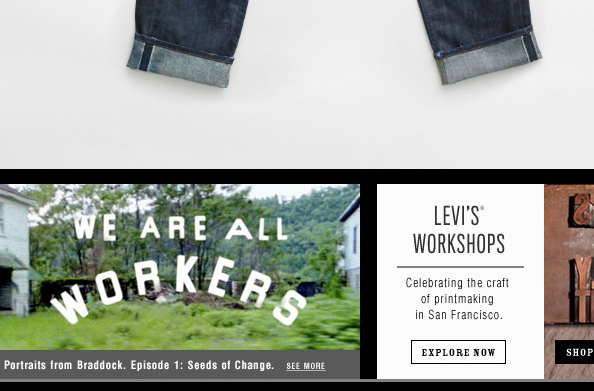 "We Are All Workers" on the Levi's site

"We Are All Workers" billboard in Oakland

Will you be wearing foreign made Levi’s 501 jeans on your next picnic trip to Braddock, PA?