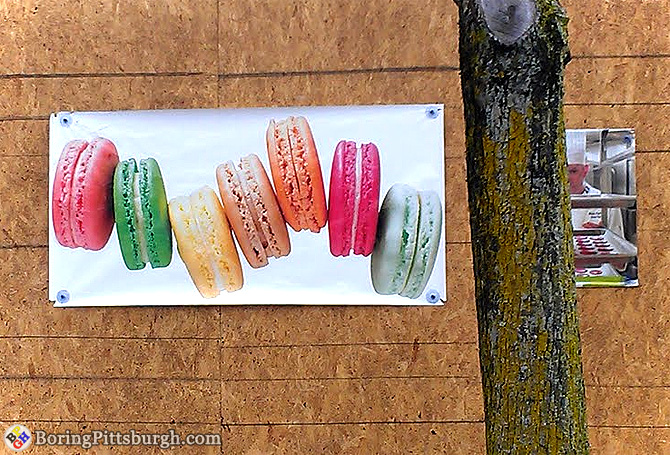 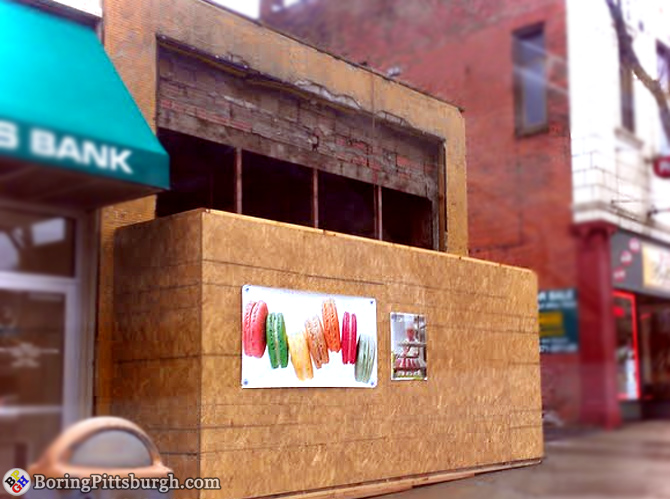 Something new is coming to Squirrel Hill. Anyone who’s been on Forbes Avenue lately already knows this. It’s hard not to notice the particle board storefront with a big picture of what looks like neon colored whoopie pies. What you probably didn’t know is that they are called macaroons.

Usually, when people in Pittsburgh hear the word “macaroon,” they think of a shredded coconut cookie which may or may not be covered in chocolate. In France, le macaron is an almond flour pastry with a flavored, meringue-like filling.

Relax, yinz won’t have to cross a bridge for this French delight. It appears that the folks behind Paris 66 are sending their master pâtissier over to do the baking. This means we can expect a high level of quality and authenticity. The side of the building has a “sold” sign on it, so we’re certain they mean business.

Masterpiece Theater – Paris 66 Master Pastry Chef David Piquard did us the honor of making raspberry macarons right before our eyes. Macarons (yes, that’s the French spelling!) are oh-so trendy, and Pittsburgh is now home to a top-notch version of the desert. We watched as he whipped up the meringue and almond flour-based cookies with the utmost delicacy, measuring each ingredient precisely with a food scale in his “laboratory.” (These macarons do not include coconut) He even shared a few secrets of the trade, but our lips are sealed. The cookie has been a standard desert in France since the 1800s and we think Picard’s version of the now-trendy treat is outstanding. It’s another example of how Pittsburgh’s palate is growing and welcoming of the new culinary treats. We recommend ordering the following flavors: rose, praline, almond, white-chocolate basil, lemon, orange carrot… oh, you get the picture! Paris 66, 6018 Penn Circle South, East End. 412.404.8166, paris66bistro.com. 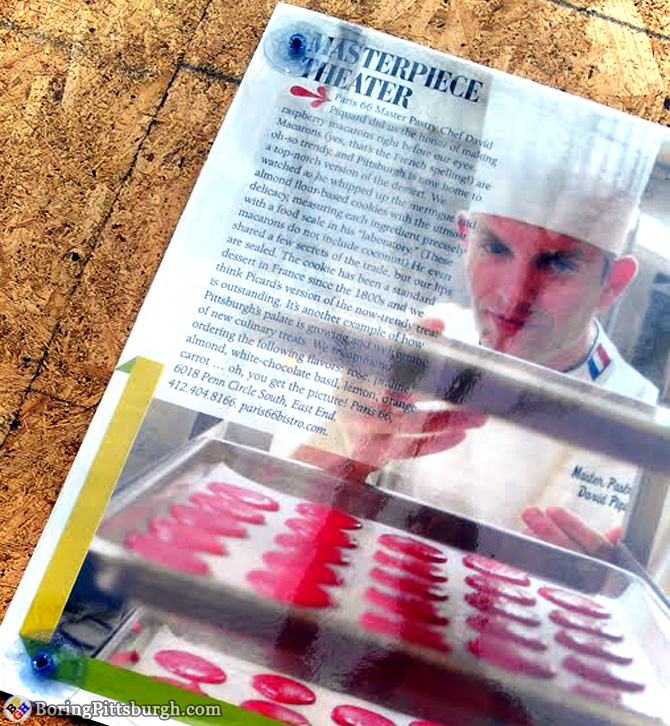 What is a macaroon, er macaron?

“A macaron (French spelling) or macaroon (English spelling) is a sweet confectionery. Its name is derived from an Italian word “maccarone” or “maccherone”. This word is itself derived from ammaccare, meaning crush or beat, used here in reference to the almond paste which is the principal ingredient. It is meringue-based: made from a mixture of egg whites, almond flour, and both granulated and confectionery sugar.

The confectionery is characterized by its smooth, domed top, ruffled circumference (referred to as the “foot”), and flat base. Connoisseurs prize a delicate, egg shell-like crust that yields to a moist and airy interior. The macaron is commonly filled with a buttercream or jam filling sandwiched between two macaron cookies. Macarons can be found in a wide variety of flavors that range from the traditional (raspberry, chocolate) to the exotic (truffle, matcha tea). Since the English word macaroon can also refer to the Coconut macaroon, many have adopted the French spelling of macaron to distinguish the two items in the English language. However, this has caused confusion over the correct spelling of the cookie.” –wikipedia