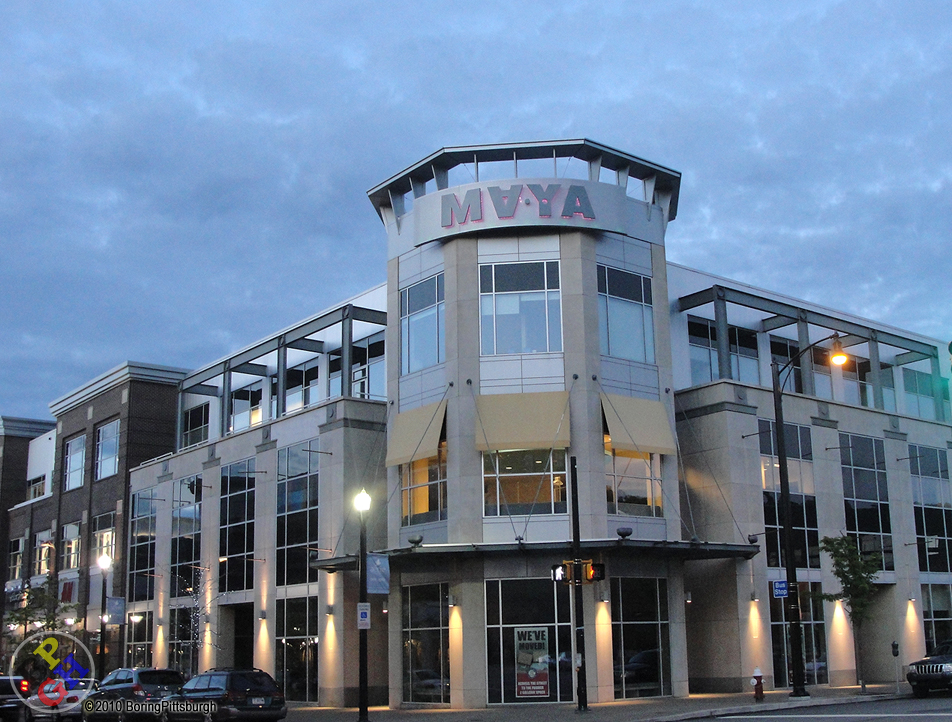 A few months ago, we wrote about Joseph-Beth Booksellers and how they moved to across the street. It would appear that the old bookstore is still vacant with “We’ve Moved” posters still taped to the doors and windows. Back in April, the I Made It! Market: Chili w/ the Works craft show was held in the empty space and it was fun, but something’s gotta give. Empty buildings like this are boring!

You might have noticed a really cool sign on the top of the building that says “MAYA” with an upside-down A. How long has that sign been there?! After a quick search, it turns out that MAYA is a big time design firm – in their own words they are a “design consultancy and technology research lab”. Ok, but why does their sign look like a nightclub?! Maybe not a nightclub, but it made us think something fun and exciting was going to fill the void.

This firm has probably been above the bookstore for several years, and maybe the sign has been there just as long… but it wasn’t noticed by BPGH until today. At first glance, it really did give the impression that the old bookstore was turned into an awesome location for a club! Maybe you had to be there. Maybe it was the way the sunset was reflecting on the intersection of E. Carson and S. 27th Street. Maybe it was a glowing fuschia stroke behind the trendy sans-serif text.

But think about it for a sec. Wouldn’t that be a sweet place for a club? And with a fantasy inducing name like MAYA? Imagine the upstairs as a lounge and the first level could be the dance floor. The location itself is pretty ideal (better than Diesel down the street) since there are parking garages everywhere and people can get to it easily from the parkway. A nightclub in that space would even do a lot to generate more business in the weakening area of Southside Works. The word “weakening” is inserted here only because it seems that some of the businesses in SSW aren’t doing as well as they used to – and to validate that claim, Joseph-Beth Booksellers did move across the street to a smaller (lower rent?) space, right?

Even proud South Side native @MichaelSally will tell you that East Liberty is the new hotspot in Pittsburgh. People are rapidly forgetting about SouthSide Works, just as they vaguely remember Walnut Street and the Waterfront (the Monroeville Mall might as well be written about in Pittsburgh history books)… and the replacement place to shop/chill is supposed to be Bakery Square.

By the way, that MAYA design company above the old bookstore sounds almost as intriguing as their sign. Their office is really interesting and from what we gathered on their site, the LEED certified office was constructed from recycled materials and is circular with a wraparound whiteboard. The pics are very tiny but have a look. They also have a pretty diverse client list including some recognizable locals like Pittsburgh Filmakers, Phipps Conservatory, the O’Reilly Theater, and the Carnegie Library to name a few. If you are interested in what they did for the Carnegie Library (or just extra bored) you can read about the project here or apply for a job here. 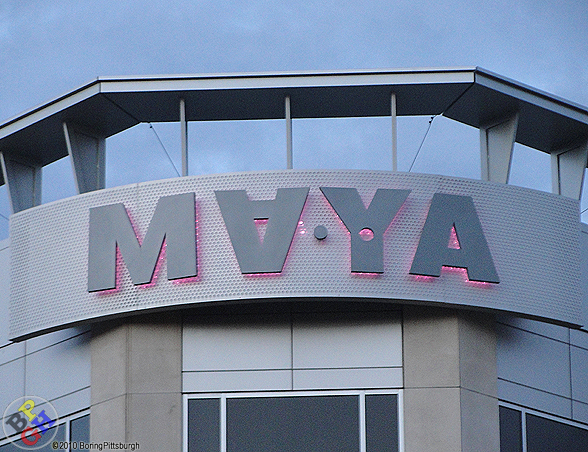 Whether or not MAYA seems like an interesting company doesn’t change the fact that we were deceived by their sign. We need more stuff to do in this city! It was a great idea to have a craft show in the Joseph-Beth space, and any other temporary events that might happen there in the future will probably be cool, too… but while other buildings are being constructed elsewhere in the city, it’s pretty boring to see another large empty space in Pittsburgh just sitting there, waiting. Waiting for what?

What could possibly go in there?