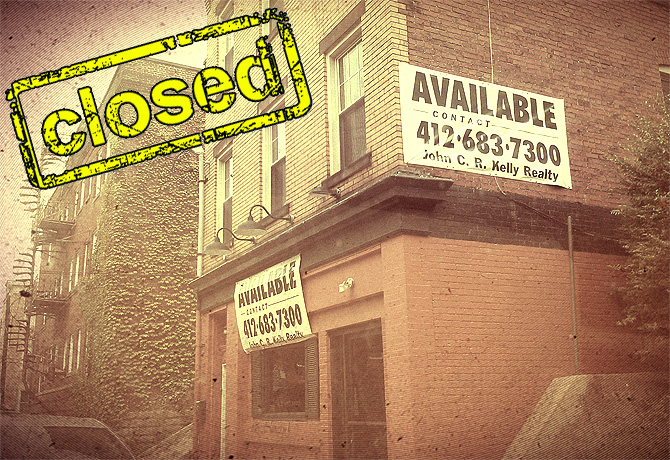 Groupon holders, BYOBers, people with no sense of time, and those too lazy to walk another block to eat elsewhere are all wondering: what happened to Pizzutti’s Italian Restaurant on Bellefont in Shadyside? They closed.

Not that it should come as a surprise to anyone, but it did come without warning. The last message on their website was “PIZZUTTI’S is on Vacation until September 15th! We look forward to seeing you soon!” Today is the 15th and there are two eyesores strapped to the building screaming that it’s available.

Some might say Pizzutti’s tried, but in all the wrong ways. Trying to run a successful restaurant doesn’t mean YouTube videos and social media accounts. And it definitely doesn’t mean awkwardly handing out “free glass of wine” flyers to Walnut Street shoppers. This isn’t NYC. A successful restaurant begins with cleanliness, prompt service and good food. Feel free to arrange those in your own order of importance.

The only hardcore fans of this place seem to be fans of BYOB, which itself is a bit of a cult (one that we’re members of). Other than that, it won’t be missed by many. As one Urbanspooner aptly put it, stepping into Pizzutti’s was like stepping into a time warp. Sometimes it took longer just to place an order at this joint than it would to complete an entire meal at other restaurants.

It sucks when a local business goes under, but it just goes to show that cooking is one thing and running a restaurant is another.