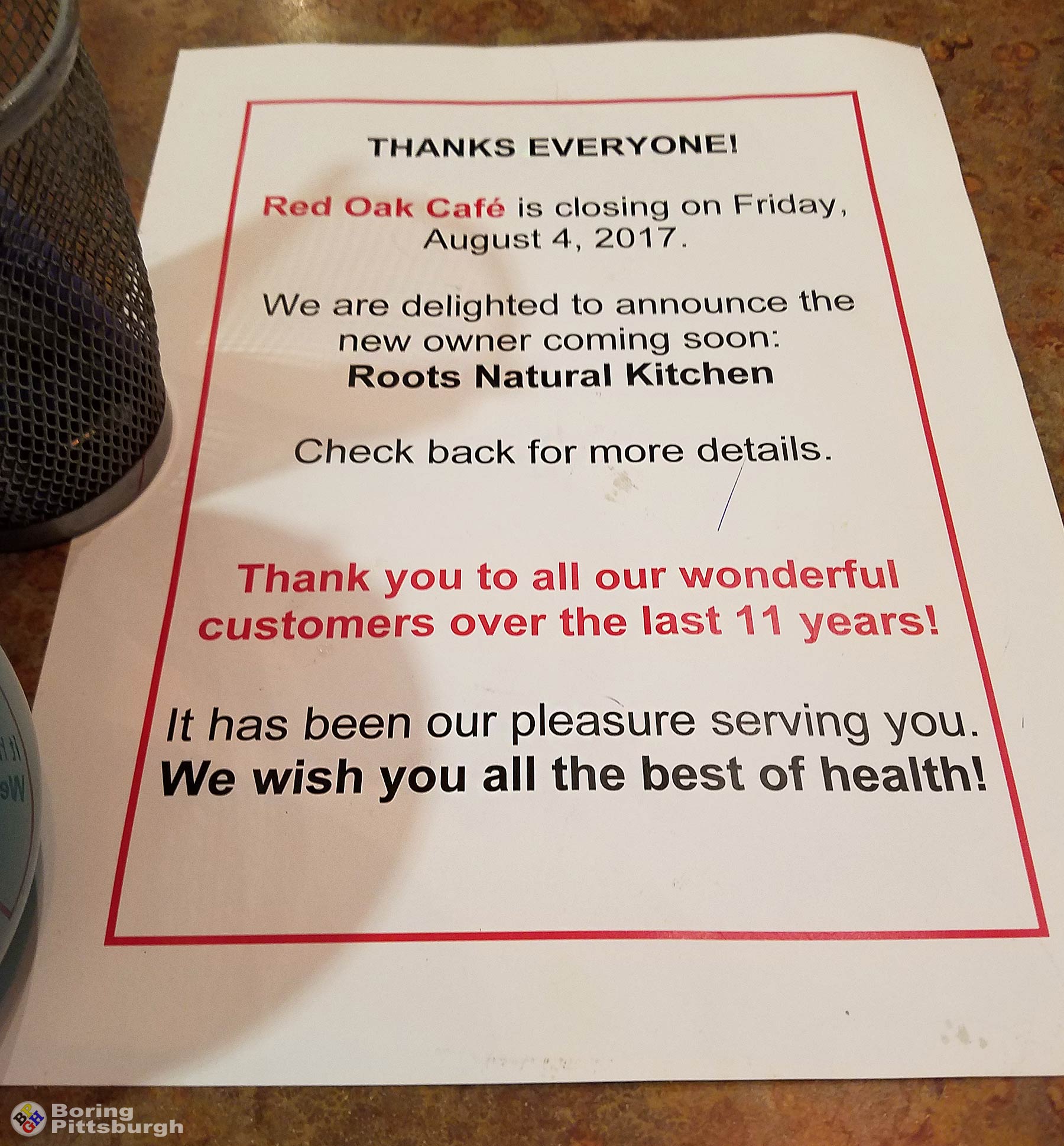 Red Oak Cafe is gearing up to call it quits after more than a decade of serving Oakland students and professionals. As of August 4, 2017, the old Red Oak Cafe on Forbes Avenue will hands the keys over to the new Roots Natural Kitchen.

While developers capitalize on fresh opportunities to spawn new buildings around Pittsburgh (many of which will sit vacant for months or years), it’s always a sad sight to see empty storefronts that could be home to a future cool businesses.

Luckily for Oakland (and Red Oak Cafe), they won’t be leaving behind another empty space since they were able to sell the business before making the move. The Iroquois Building which houses the space is owned by UPMC.

The new restaurant has its own roots in Charlottesville, Virginia and a quick glance a their Facebook page shows a location in Delaware. To be honest, we don’t know much about them. It doesn’t help that their website looks to be freeze-framed in a perpetual state of Under Construction (side note: Red Oak’s website is already offline). Hopefully the food they serve won’t be as frozen since the name implies natural aka healthy food. We’re sure they are going to be better than the disappointing Hello Bistro across the street, but stay tuned for the full review!

Founded by UVA alumni, Roots provides the University and the Charlottesville community with healthy and delicious natural food in a fast-casual setting.

As far as we know, Red Oak Cafe didn’t bail or fail into selling the business. In a brief conversation with an employee on the opposite side of the counter, we were given the impression that the owner simply got bored and wanted a change. That said, starting a restaurant from the ground up is hard, but it’s even harder to fail at selling food in Oakland.

Roots Natural Kitchen in Newark, Delaware has a Yelp rating of 4.5 and 4.7 on Facebook. Compared to Red Oak’s solid 4, we’re excited about what they will bring to the table.

Red Oak Cafe served decent enough food, but the service was slow and placing/picking-up orders was confusing. Our advice to Roots: be mindful that “lunchtime rush” means customers are in a hurry and consider a simpler menu and ordering process. Also, we know it’s Oakland, but at least try to be clean – this alone will place you miles ahead of most of the food joints on the block.

When are they opening?
TBA

What are the hours?
TBA