On the Set of One for the Money in Northside 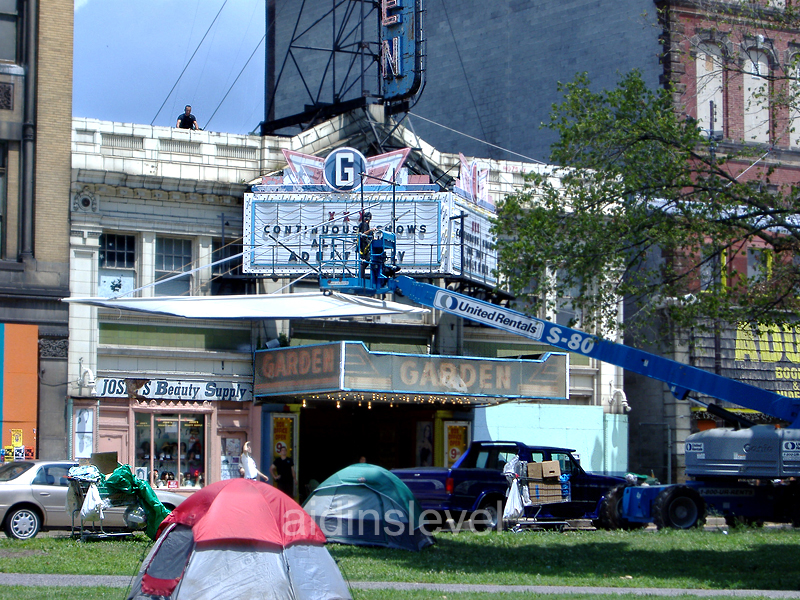 The Garden Theater in North Side is taken back in time

Where was Taylor Lautner filming this week? Not in the North Side of Pittsburgh like everyone suspected. Hollywood was indeed in that part of the Burgh, but filming One for the Money with Katherine Heigl. Guest contributor, Aidinslevel, sent in the following pictures from her trip to the movie set.

The City Paper also has a great piece that uncovers the history of the 95 year old theater. One interesting fact in the article answers the question of why was it called the “Garden” Theater in the first place?

Its original owner was one David E. Park, a bank vice president…  the theater’s name was chosen “as a pun on the name of the owner” (get it? Park? Garden?) so it wouldn’t be confused with the Park Building Downtown.

While we’re on the topic of historical facts, did you know that the North Side used to be another city known as Allegheny? It’s true. Pittsburgh won the right to takeover the city after a Supreme Court decision in 1907. Needless to say, the citizens of old Allegheny were supremely pissed off.

Aidinslevel on the set of "One for the Money"

"One for the Money" filming at the Garden Theater in Northside

Hollywood takeover in Pittsburgh's North Side

A walk around the set location in North Side

Inside the Garden Theater film room by planetschwa

Inside the Garden Theater by planetschwa

Aidinslevel also writes for a Twilight fan and you can find her stuff here.

Do you have the inside scoop on the filming in Pittsburgh? Send your pictures and tips to tips@boringpittsburgh.com