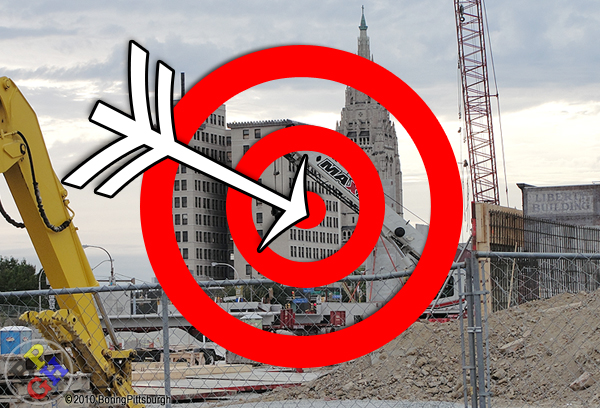 Target Store to Open in East Liberty Summer of 2011

A double decker Target store is being built in East Liberty on Penn Ave. You no longer have to deal with all that damn traffic on the Homestead High Level bridge – and no more long drives to Robinson or Mcknight Road. Ground has been broken and the construction has begun. The new store is set to open sometime in July 2011. Supposedly it is the first Target of its kind with two stories and walls full of windows. Improvements to our city are exciting, and even if shopping centers and department stores are boring… the level of convenience is definitely increasing!

The interesting part is how East Liberty, which was once an area of Pittsburgh that suburbanites would have avoided (say 10+ years ago), is slowly turning into a little suburb of its own. Check out this article from the East Liberty Wikipedia page, in a section entitled Decline.

Two decisions in the 1960s changed East Liberty. The first was an attempt to halt a slow trickle of businesses from the City to the suburbs. In the early 1960s, a few of East Liberty’s larger merchants saw that some residents of Pittsburgh’s East End were moving to the suburbs, and that suburban shopping malls were consequently growing and expanding. These merchants feared that suburban development would harm East Liberty’s status as a market center, and asked the City of Pittsburgh’s Urban Redevelopment Authority (URA) to take action.[2]

The URA proposed creating an outdoor pedestrian mall on Penn Avenue, to be surrounded by car-friendly roads on which large stores, surrounded by parking lots, could serve shoppers just as the new suburban stores were doing. This plan required the demolition of roughly half of the 254 acres (1.03 km2) that comprised East Liberty. After some contentious debate, the plan was approved, and the URA stopped traffic on the busiest part of Penn Avenue (the old Greensburg-Pittsburgh turnpike of Jacob Negley’s day) and routed it onto a series of new, one-way thoroughfares (called Penn Circle) that formed a ring around the central business district. Many small shops were destroyed—a million square feet of retail space in all.

While the URA was remaking the street plan of East Liberty, the City of Pittsburgh’s housing authority made a second set of changes to the neighborhood. Housing authority planners noted that the nearby African-American neighborhood of Homewood was overcrowded, largely as a result of the URA’s earlier demolition of the lower Hill District to create the Civic Arena, which had forced many of the Hill’s African-Americans out and into the North Side and Homewood. The housing authority’s solution was to build three large housing complexes, each close to 20 stories tall, in East Liberty along the new Penn Circle roads.

These two measures ultimately failed to preserve East Liberty as a market center, and arguably hastened the old neighborhood’s demise. By routing cars away from Penn Avenue, the URA’s new street plan seemed to send a message that the neighborhood’s commercial center was not worth visiting. The housing authority’s massive housing complexes quickly developed a reputation as centers for crime, and this reputation, which was perhaps reinforced by racial prejudice against the complexes’ African-American residents, likely did as much as the confusing street plan to drive commerce away from East Liberty.[3]

In the span of just a few years during the mid-1960s, East Liberty became a blighted neighborhood. There were some 575 businesses in East Liberty in 1959, but only 292 in 1970, and just 98 in 1979. The businesses that remained tended not to serve the majority of nearby Pittsburghers, but only the captive audience that remained in what was now an urban ghetto.

So this plan for East Liberty to become a shopping district isn’t new. It has actually been attempted a couple times before, and failed. Penn Circle and the connecting streets in East Liberty used to be impossible for newbies to navigate. Lot’s of people probably remember trying to find their way to the AAA, only to get lost in a pattern of one way streets that seemed to direct drivers farther away from their destination with each turn. And remember that apartment building you had to drive through? Once you ended up over there, you knew you were officially lost and had to turn around.

We couldn’t find any pictures that show the road going under that apartment building (if you have one please let us know) but here is a picture of the demolition with a funny quote from juliekaffe on Flickr, in reference to that specific building:

On the downside — albeit very minor — a major landmark is falling. How else to direct someone to Highland Ave without saying “Just keep driving down Penn until you drive under the very ugly building…” 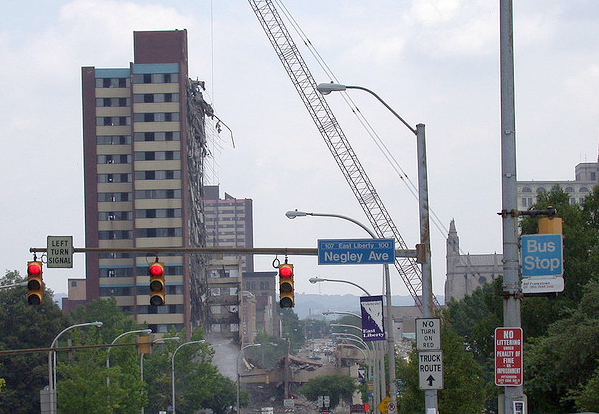 What do you think will be the next big box
to break ground in East Lib?