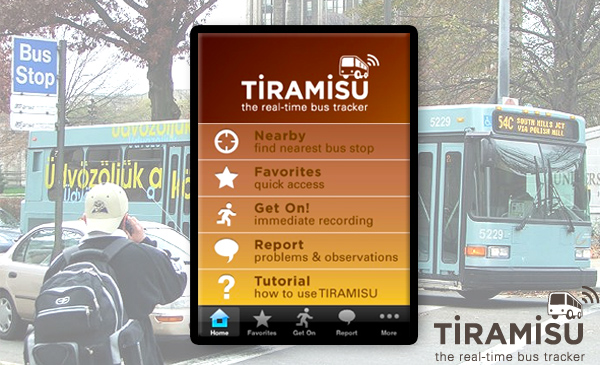 You already know about how the buses are tracking you, but thanks to a couple of developers from CMU, now you can track the buses! Tiramisu is the new iPhone app that uses crowd-sourcing to get an idea when the next bus will arrive at your stop.

When a rider first activates the app, Tiramisu displays the nearest stops and a list of buses or light rail vehicles that are scheduled to arrive. The list includes arrival times, based either on historical data for that route or on real-time reports from riders. When the desired vehicle arrives, the user indicates the level of “fullness” and then presses a button, allowing their phone to share an ongoing GPS trace with the Tiramisu server.  Once aboard, the rider can use Tiramisu to find out which stop is next and to report problems, positive experiences and suggestions. (press-release)

This is perfect since most people alleviate boredom and awkwardness at the bus stop by playing on their phone. Instead of fake texting people, now you can use your cell to figure out when the next bus is coming.

The only foreseeable downside to crowd-sourcing arrival times is that you have to depend on other bus riders to update their app. Will folks use the app just to get an idea when and where to catch the bus? Or will they follow through to earn the extra karmic point by sharing their GPS data? After riders pay the fare or dig their smart cards out for scanning, will they remember to go back and update Tiramisu? Hopefully the guy standing with his crotch in your face doesn’t let go of the bar to start fiddling with his phone. What if he’s updating his Tiramisu app and the bus hits a pothole… nevermind.

Tiramisu is a brilliant concept for a city like Pittsburgh that doesn’t have a real-time arrival notification system. Boring Pittsburgh would like to see future versions that turn bus tracking into a game with points and fun incentives for following through with updates. Or maybe create a comments/chat section to get people riding the same bus to play along and chat. The future of this app has great potential and can turn into something not only useful, but unboring as well.

Note: While it might be able to tell you when the bus is coming, as of the first version, Tiramisu is still unable to predict whether the bus driver will actually stop to pick you up or not.

Where can I get the Tiramisu iPhone App?
Download it in the iTunes Appstore!

How much is it?
FREE for now!

Is this app available for Android phones?
Not yet. But coming soon!

What about Blackberry?
LOL!

Why did they name it after a desert?
Tiramisu means “pick me up” in Italian. Use this app to find out when you will be picked up!

To summarize, this app does everything that Stu (@bus15237 #BurghVerified) already does everyday on Twitter. If you are curious and want a sneak peak into what users doing Tiramisu, check out the live updates here (live map as well). At the time of publishing this article, the app had 3,009 trips recorded.