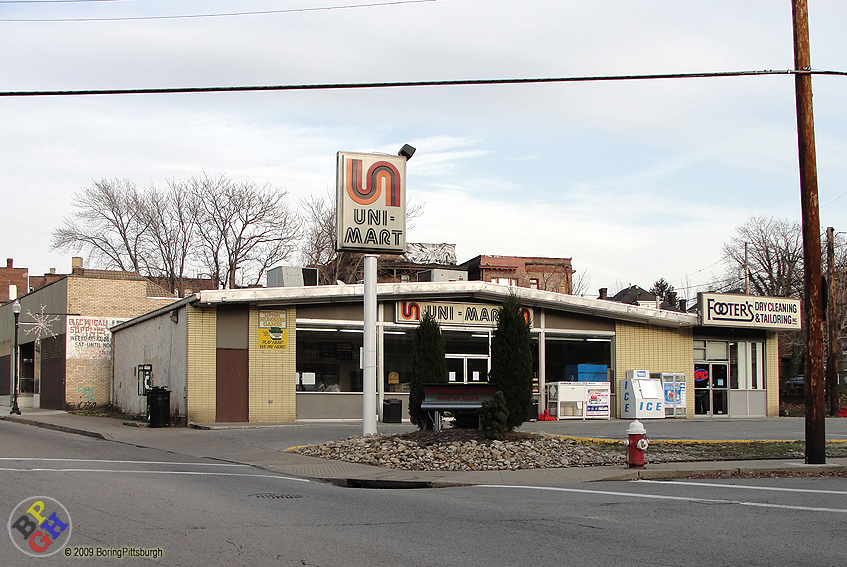 Uni-Mart closed after more than 20 years

The Uni-Mart on Ellsworth Avenue is closed for good. After more than 20 years of steady business, the Shadyside landmark went out with a weekend BOGO liquidation sale.

Now just an empty parking lot, many Shadysiders can remember making late-night Uni-Mart trips – usually after 2:00 am. When the locals bars close, the next stop for a lot of people was the corner of Ellsworth and Summerlea Street where they could grab a bottle of water, a pack of smokes, or some instant noodles. The convenience will probably be missed by locals.

The question everyone wants to know: Did the Uni-Mart close because they got robbed too many times? In September it happened three times within three weeks, by the same woman! Earlier in the summer (of 2009) they even got held-up by a guy with an HIV infected needle.

According to one of the cashiers (the night before the doors were locked), they had to close due to bankruptcy, not robberies. Can’t we assume that going bankrupt might have something to do with being robbed so often? Just Google “unimart shadyside” and almost all of the search results are crime related.

Convenient? Yes, but not everyone will miss it. The only review online was 2 out of 5 stars and said:

this store is dirty, and cluttered, and doesn’t seem like it belongs in shadyside. yes they stay in business, but only because they’re the only convenience store around. they don’t keep your average convenience store items in stock, like mountain dew and root beer. they have old breads. they do have a wide selection of products, but i’d check the expiration dates before buying anything. there have been times when there are two people behind the counter, and i’ve still waited 10 minutes for someone to check me out because one of the girls behind the counter pretends to look busy while the other one takes her time with the customer in front of me.

So now what? Where is the closest 24 hr convenience store? Rite Aid on Walnut closes at like 10pm and Giant Eagle closes at midnight (actually that’s a lie – they’re known for locking people out at about 11:49). There’s a new convenience store on the corner of Negley and Center, but we do not have confirmed hours. Looks like the closest place might be the new GetGo on Baum Blvd.

Uni-Mart on Ellsworth thanks the customers.