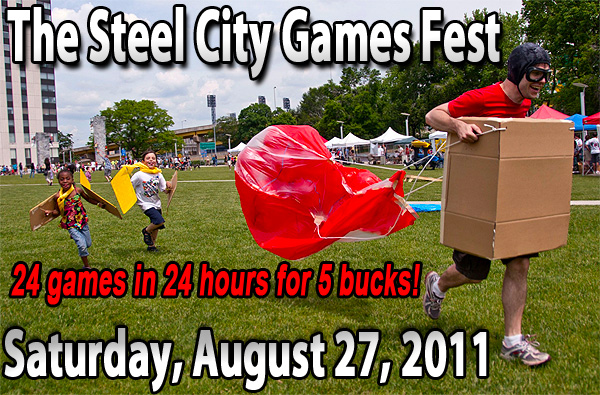 Pittsburghers are invited to come out and play with Obscure Games at the 2nd Annual Steel City Games Fest on in East Liberty.

SCGF is a 24-hour festival of new and original sports, street games and physical games. The festival’s goal is to celebrate the power of play, revitalize urban space, foster community and explore creativity in unorthodox ways. The festival will take place in East Liberty at the Shadow Lounge, the Waffle Shop and Mellon Park.

Obscure Games is a Pittsburgh-based non-profit project that designs and creates new sports, street games, board games and parlor games. The organization has produced hundreds of public game events in its two-year existence, and was able to fund the entirety of this year’s festival through community and member support on Kickstarter.

Kickstarter is a web service that crowd-sources funding for creative projects, and it uses a unique all-or-nothing funding method where projects must be fully funded or no money changes hands. Backers of the 2011 Steel City Games Fest were rewarded with copies of the festival’s “Zombie Ball” poster, custom graphic t-shirts, festival admittance and “plus-ones.”

At last year’s festival, 20 games played out over three days. This year, 24 games will debut over 24 hours, including urban games like The Signal, an all-night chase played out in the streets and over the radio; new sports like the award-winning Silverball, human-sized pinball played on a hill; and parlor games like Revolucion!, a government-toppling version of Monopoly.

The Steel City Games Fest is similar to other national and international game festivals, including the IgFest, You are Go and New York City’s Come Out and Play Festival, where Obscure Games was recently awarded with 2011 Best Family Game.

When do the games begin?
at noon

What does the schedule look like?
from 12pm – 7pm – Registration and indoor games
Shadow Lounge
5972 Baume Blvd (map)
Pittsburgh, PA15206

What games are being played?

Can kids play these games?
Of course! Most of the games are for ages 13+ but some are for 7+ also

Can adults go?
Yes! Go. Loosen up and have some fun for once!